An A+ For The F Word - Destiny MAN

An A+ For The F Word

AS THE HIGHVELD SHAKES OFF WINTER AND CLAWS AT THE PROMISE OF SPRING, PERCY MABANDU TAKES THE LATEST LEXUS F-SPORT TO LEISURELY LEARN THE LAY OF ZULULAND 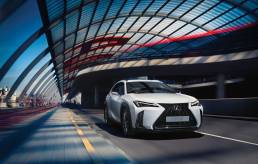 The isiZulu word for “car” is pretty unimaginative. In fact, it’s borrowed from English. Amazulu refer to a motor car as “i-moto”. By contrast, for a proper Setswana-speaker, a car is conceived of as a beast of a thing. The Batswana have devised an idiomatically pregnant word: “sejanaga”, which loosely translates to “that which devours the land”. It’s a concept that conveys no illusions of elegance. In the Tswana mindset, cars are for conquering distances or consuming the world: travelling!

These were the thoughts conjured up on my recent drive to the Umzimkulu River Valley in KwaZulu-Natal. Blame it on a friend at Lexus SA, who lent me its latest

F-Sport and dared me to make the scenic drive. So this review was sparked by a fiery orange trinket. As for the trip, there’s no better way to see out the last days of winter and greet spring.

The first task for my land-eater was to clear the brown and beige dead grasslands that stretch for much of the N3. It’s a long and steady route, perfect for acquainting man with his driving machine. The Lexus F-sport offers a smooth ride with luxurious handling as it manoeuvres through the meandering national road. A compact crossover, it’s an entry-level CUV poised to woo a younger customer base. However, the car has its work cut out for it, since it’s vying for automotive supremacy in a market segment viciously contested by

other major players like the Audi Q3, the BMW X1 and even the Mercedes GLA-Class. But that’s petrol-head banter. I was much more like a painter driven to see it slide through the rolling emerald-green hills of Mzimkhulu, near Port Shepstone.

There are few places as heavenly as the hidden enclave called The Gorge Private Lodge. It’s sinfully beautiful, with views to die for, remote and ravishing. Nestled on the edge of the Oribi Game Reserve, The Gorge has only eight huts to rent out. In our new-age, out-of-office work cultures of itinerant professionals, this leafy retreat offers ideal limited connectivity. In fact, it’s priced in part for its unrivalled luxurious privacy.

Driving in, one has to veer off the asphalt

track onto a gravel road – a slight nuisance, made bearable by the F-Sport’s ability to block out much of the exterior ground noise. This “seeing-without-hearing” turns the windshield into a kind of screen from which to enjoy the scenic land as one slowly approaches the destination.

The car’s interior is intelligent, but not very airy and slightly cramped. Though highly digital, the dashboard sports an analogue watch, giving it a touch of elegance. It’s part of the eternal battle between technological advancements and the allure and charm of the old world: a spirit that defines greater Mzimkhulu too.

Much of the area is blanketed at intervals by stretches of organic rosemary, macadamia nuts and other crops. Even the air is touched with the thick funk of sweetness evaporating. Lush!

This botanical bounty was historically ploughed and planted in part by indentured Indian labour. Today, it’s a workplace used by migrant women and men from across our subcontinent, mostly Zimbabweans and Malawians with a knack for the hospitality industry.

There’s peace here – a kind of stillness that comes with the possibility of leaving daily tasks to the others. Here, money buys mornings with no beds to make, towels to fold or dishes to wash.

Later, when one’s head is wine-mellow and the sun’s in a steady decline, slouching towards a nippy dusk, there’s time to contemplate how the alchemy of shale soil and a little toil in the cool Bokkeveld climate produces a Jesus-juice with notes of granadilla and grapefruit: Sauvignon Blanc!

So I was lazily laid out on a pool lounger, abandoned by my partner for a smiling massage therapist. Wendy, my own tender-voiced masseuse, persuaded me to let her oil and knead my feet. I relented. She practised her mysterious craft of scents and softness on me, all the while explaining what can be seen and learnt in the magical Umzimkulu Valley.

“Will you guys do the jump?” she asked, referring to the world’s highest gorge swing at Oribi Gorge. It plunges 110m from the top of the gorge near Lake Eland. I told her that wasn’t my idea of relaxation: too much adrenaline. Smiling, she switched to other topics, like the story of a rock python that once made a bad meal of a porcupine. Having swallowed its prickly prey, the large serpent, unnerved by human presence, tried to regurgitate its catch. A bad idea! In its attempt to push out the spiky rodent, the snake pierced and punctured its own vital organs with the eaten animal’s sharp quills and died. Today, Wendy told me, visitors to the nearby Lake Eland Game Reserve offices can view the dried and framed skin of the legendary rock python on display. “There are many snakes like that here,” she warned, killing my plans for a hike. However, like a boy determined to be brave, I pledged to make a pilgrimage to the famed python’s skin.

This talk of snakes and game affected my drive out of the valley. Every stick along the asphalt stretch looked alive. A blade of sugarcane leaf blown in the wind rose like a serpent, making for paranoid-quick lane changes. The F-Sport seemed built for this, though: with every sudden demand for power, the four-cylinder engine roared as the standard CVT hung the revs to find its mojo on the uphill climb out of the valley. It was a perfect sound for the metaphor of a car as a kind of beast. There’s no better groan than the one you hear when you’ve left the gravel for proper tarred road, switching in and out of cruise control, forgoing the lush green along the N2 for the yellow and beige interior, leaving the holiday and returning to real life and hustle.