Into The Wild: Pepe Marais and the Pursuit of Greatness - Destiny MAN

Into The Wild: Pepe Marais and the Pursuit of Greatness

In 2006, I was getting over the wave of being a Simunye (SABC 1) presenter. I was pursuing a deferred dream of getting back to my first love — producing my own TV shows through my own business. Then I met a man whose impact on me turned my dreams inside out. While contemplating TV producing, I spent my days in bookstores, the gym and at home. Living with my extended family at the time, I enjoyed the privacy of ordinary life: a refuge from the four-year whirlwind of continuity presenting.

At this time, my cousin, Loyiso Twala, was my closest confidant. Six years my junior, freckled and blessed with an insanely creative imagination, he was easy-going, authentic and a great companion. A graduate of the Vega School, where he’d majored in art direction, he’d recently started at a new agency, Joe Public. The offices were in Sandton, down the road from our home. Since he didn’t yet have a driver’s licence, I did the daily commute of dropping him off at the office.

After about three months of this routine, we pulled up to Joe Public one morning and I noticed a strange-looking, grungy dude in my rear-view mirror. What caught my attention wasn’t so much his hippie look, nor the fact that I had engaged my gear lever in reverse, but the peculiar shoes he was wearing – bell-tipped and straight out of Liewe Heksie’s wardrobe. He was moseying along, head drooped like the body double of a Wayne’s World character. Startled, I asked Loyiso: “Kanti!?”, my shoulders shrugged upwards, my arms spread and my hands palms up. Laughing, he replied: “That’s my makhulu boss!”

This Merlin-looking dude, gingerly walking by, was heading up this agency? I couldn’t believe it! He was the total antithesis of ad veterans like the dapper Graham Warsop and Renée Silverstone (Jupiter Drawing Room), John Hunt, Jannie Ngwale and Peter Vundla. He looked more like Teen Spirit. I drove off thinking: “Now, there’s a guy who’s going completely against the grain. If he thinks he’s a match for the likes of Herdbuoys, Hunt and O&M, he’s dreaming!”

“All men dream, but not equally. Those who dream by night, in the dusty recesses of their minds, wake in the day to find that it was vanity. But the dreamers of the day are dangerous men, for they may act on their dreams with open eyes, to make them possible.”Thomas Edward Lawrence

Fast forward to 2019. In a boardroom in Bryanston, we sit as a collective, brainstorming suggestions for cover stars who’d make an awesome impact for the come-back issue of DESTINY MAN. We needed a truly original man. A leading man. Someone standing apart from the pack, battle-tested and triumphant. A survivor. A man who’s fallen straight into the hands of death and has risen to bigger and brighter life.

Then, out of Legend’s mouth, came a name so obvious that we wondered why we hadn’t thought of it sooner. Of course – Pepe Marais! The perfect embodiment of everything the magazine should reflect. We got straight to work securing our man.

God, I thought, he must be busy running Joe Public, now a seasoned ad man, far from the pixie-grunge boy he’d been. A mogul and one of the most celebrated and respected execs in the industry and on the continent. Would he be interested? He’d just released a book and bagged a major account that was growing rapidly. Would he agree?

Anxiously, I made the call, dreading the inevitable “thanks, but no, thanks”. A small, gentle voice answered: the receptionist. I made my plea. She put me on hold. Then came a request to put it in an email and she’d ensure he received it.

Just one day later came the answer: a definitive “yes”!

After sharing the great news with the team, I rushed to the bookstore to get my own copy of Growing Greatness. That evening, I started reading it – and found it impossible to put down. It was a page-turner. I love biographies: they’re like invitations to an intimate conversation with someone sharing their life’s journey. Marais’ book was candid and structured almost like a thesis or dissertation. Suddenly I was seeing the man – and his rarity – in a whole new light.

It started out a little desolately, like Dickens’ David Copperfield, then moved on to a melancholy account of a difficult adolescence, followed by an early transition to manhood in the military, where a dramatic about-turn would spark his innate creativity and the beginning of a South African business legend. The young, self-effacing, bashful young man would embark on an Iliad-esque journey to the pinnacle of the biggest independent, full-service advertising agency on the African continent – average Joe to Joe Public United.

A couple of days later, I made my way to JPU HQ in Bryanston (a mere 1,5km from our office) to meet the man in person. By this time, I’d watched copious video collateral, read multiple articles and listened to everything I could get my hands on.

I was struck by his tall, slim, dapper appearance. Nothing of the top-dog chic beloved of ad agencies. Instead, he had short hair, fitted denims, a shirt, happy socks, smart dark shoes, a signature vest and a JPU button.

Nervously, I began my proposition for our cover story. As I talked, I noticed how attentive, intrigued and engaged he was. A careful, considerate listener. We had an instant rapport.

Four days later, we were catching an early flight to King Shaka International. On the way, the conversation spanned everything from politics to the wealth gap, populism, benevolent dictatorship, music and art. Marais was tuned into every word, his natural curiosity and interest in people, education and social impact making him an engaging and inspiring interlocutor.

Finally, after touching down, we headed to our destination: The Chairman, a rustic gem of a restaurant bar along The Point precinct on Mahatma Gandhi Road that would serve as our canvas for Marais’ unique magic.

The Bar team are proud to share it with you…

d men hold a strange place in 21st century society. One on hand, they are ascribed with all the magical powers and creative zeal of Mad Men’s Don Draper, and on the other they are often seen as ruthless tyrants, hell bent on getting you hooked onto the next purchase you don’t need. Pepe Marais is neither of these things. An army officer, turned graphic designer, turned advertising mogul, his story does not fit into neat archetypes, sharp copy decks and witty one liners. Instead, he is a man in motion – drawing on his history, heritage, interests and a hunger for learning, to reincarnate himself in new ways. Pepe Marais is a Founding Partner and the Chief Creative Officer of one of South Africa’s most successful and most awarded advertising agencies, Joe Public United. And while Marais’ super-zen Twitter timeline and salt and pepper beard give the air of a man on top of the world, it was no easy climb.

In his first, a truly formidable book, Growing Greatness, Pepe gets the chance to live without stereotypes and assumptions and gets to grips with the real lessons of ‘making it big’. But of course, before there was Pepe Marais, there was Pepe, a young boy living in a single parent household with meager means. In the book, he tells the story of his genesis like this:

“I will always be grateful to my mother for the incredible effort she put into giving her children everything possible on an impossibly small income: a home filled with values, food on our plates, clothing and basic education. Other than that, which I know to be more than most in a South African context, I can safely say that for everything else I have paid my own way.

Looking back, I would not have had my life any other way, because without even the worst of it I would never have become the person I am today. My trubulent early life, without a doubt in my mind, shook me up and stirred my entrepreneurial spirit.

The experience remains more valuable to me than all the money in the world”.

“We initially created Joe Public Take-Away Advertising to revolutionise the advertising industry, with the vision of one day being the largest proudly South African entity that speaks directly to the man and woman on the street, clearly represented by our logo. Fast-forward to 2019 and we’re at a turning point in our business where we’re manifesting what we envisaged through an announcement we’ll soon be making about the future of Joe Public United.”

And in many ways, his journey has indeed been a whirlwind. He describes his progression through adolescence as one in which he never felt good enough. But after a nudge from cupid, Marais took the leap and decided to draw the portrait of his love-interest on the surface of an egg, a sincere gift of courage and creativity. It worked, and Pepe not only landed the woman of his dreams, who remains his wife today, but figured out that he might be decent at something.

“My first act of love took immense courage, and I very soon noticed a shift in the way Heidi looked at me. My creativity somehow resonated with hers and unbeknown to me I would soon no longer be playing Lego. A few weeks later during our December holidays and while at a braai on my friend Stephan’s farm, Heidi broke up with my best friend and became my first girlfriend. It was the most defining moment of my life as the impact of our relationship, every single one of the trials and tribulations, the tremendous ups and excessive downs that we would face over the decades to come, ultimately culminated in one final, momentous event that would fundamentally change the course of my entire personal and business life,” he explains.

LOOKING BACK, I WOULDN’T HAVE HAD MY LIFE ANY OTHER WAY, BECAUSE WITHOUT EVEN THE WORST OF IT, I WOULD NEVER HAVE BECOME THE PERSON I AM TODAY. 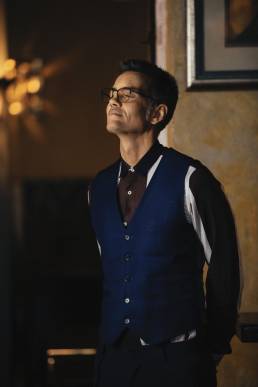 For the rest of this article, purchase the latest copy of DESTINY from your nearest retailer